The 210 guests at the 200 Club of Mercer County’s Annual Luncheon on Wednesday, June 13, were eager to convene for thousands of reasons – the acts of valor carried out 365 days per year by Mercer County’s public safety and rescue personnel. The mission of those attending the lunch at the Stone Terrace in Hamilton Square, however, had only one goal – to pay tribute to 13 law enforcement officers being honored for their bravery, skills, character, determination, and unwavering commitment to the health and well being of the county’s citizens.

The 200 Club of Mercer County, which costs $200 to join for membership, was founded nearly 40 years ago to provide financial assistance to the families of public safety and rescue personnel who have lost their lives in the line of duty. This includes the police officers (state, county, and municipal), fire fighters, rescue squad technicians and corrections officers of Mercer County. Crucial to its mission is the celebration of those first responders who have exhibited extraordinary courage and bravery under difficult or hazardous conditions.

The 200 Club of Mercer County named their awards the “R. Peter Hodge Valor Award” in honor of its late founding board member “who was truly an inspiration for his dedication and support of all first responders in our community….These honorees on the scene at these incidents, like so many safety and rescue personnel, put their own lives in danger to protect others,” said Greg Blair, president of the 200 Club of Mercer County. “They are quiet real-life heroes that embody all that the R. Peter Hodge Valor Award represents.”

In addition to the Valor Awards, the 200 Club presented a Special Recognition Award to the six officers of the Mercer County Task Force, who met gunfire, when they attempted to serve an arrest warrant – a situation that led to a dramatic and life-threatening 36-hour standoff.  The officers involved were: Mercer County Prosecutor’s Office Detective Anthony Abarno; Sheriff’s Detectives William Perez, Joseph Tuccillo and Steven Niederer; NJ State Parole Board Officers Timothy Healy and Barry Volkert.

Mr. Spadea, described by Club President Gregory Blair as a “tireless advocate on behalf of law enforcement,” every Friday morning on his 101.5 FM radio show highlights a member of local law enforcement as part of his regular #BlueFriday segment. He told the first responders that “you have a voice (in Bill Spadea) that understands how difficult and how challenging your job is….You run towards gun fire, not away from it; you have incredible courage and integrity. Young people, in particular, and people of all ages need to better understand and appreciate what you selflessly do for others….My job is to broadcast continually your value….As long as I have a microphone, you have an advocate.”

For more information about the 200 Club of Mercer County, to join as a member, make a donation, or volunteer to help implement its mission, please visit www.mercer200club.org or call 609-498-7727. 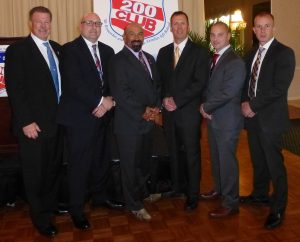 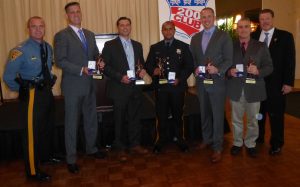 Back to Main Luncheon Page