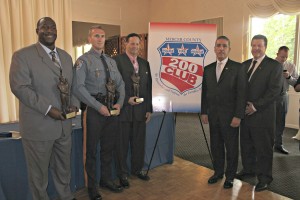 MERCER COUNTY, NJ— Officers Robert Albanowski and Marlon Parrott from the Trenton Police Department and Det. Adrian Markowski of the Robbinsville Police Department will receive R. Peter Hodge Valor Awards at 200 Club of Mercer County’s Annual Luncheon on June 17 at the Stone Terrace by John Henry’s in Hamilton.  200 supporters from the community are expected to attend to honor the Valor honorees and hear Marshal Juan Mattos’ keynote address.

In 2015, the 200 Club of Mercer County named their awards the “R. Peter Hodge Valor Award” in honor of its late founding Board member who was truly an inspiration for his dedication and support of all first responders in our community.

“These honorees on the scene at these incidents, like so many safety and rescue personnel, put their own lives in danger to protect others, said Greg Blair, president of the 200 Club of Mercer County. “They are quiet real-life heroes that embody all that the R. Peter Hodge Valor Award represents.”

Juan Mattos, Jr., United States Marshal for the District of New Jersey will make the keynote remarks. The U.S. Marshals Service is the oldest Federal Law Enforcement Agency.  On September 24, 1789, President George Washington appointed the first 13 U.S. Marshals following the passage of the first Judiciary Act.  This will be the first time a United States Marshal has spoken to the 200 Club of Mercer County audience.

The Times of Trenton / NJ.com