Ewing Fire Chief Jeffrey Lenarski presented the first Valor Award to Ewing Fire Captain Michael Anderson. Captain Anderson did not think twice before risking his own life to save a grandmother trapped on the second floor of her burning home May 2011.

Ewing Police Chief Robert Coulton presented Valor Awards to three Ewing Police officers: Frederick Dow, Jeffrey Caldwell, and Detective Michael Pellegrino. These men acted quickly at the scene of a car crash in January of 2012 where a telephone pole had fallen atop the vehicle. The three officers were able to pull an 81 year-old mother and her 54 year-old son out of the car just before it was engulfed in flames.

“This group of first responders, like so many safety and rescue personnel, put their own lives in danger to protect others,” said Greg Blair, president of the 200 Club of Mercer County. “Their courageous actions saved lives. They are quiet real-life heroes that embody all that the Valor Award represents.”

Colonel Rick Fuentes, Superintendent New Jersey State Police provided an engaging and informative keynote on the topic of “The State Police After 9/11” and how security has changed drastically not only nationally but on state, and community levels as well. Colonel Fuentes described a State Police reorganization that has increased capacity of resources with their law enforcement, intelligence, corporate, and emergency response partners. 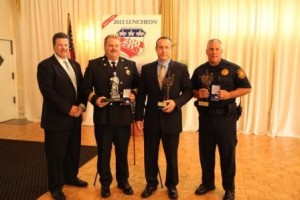