The 200 Club is honored to have Juan Mattos, Jr. provide the keynote address at the Annual Luncheon on June 17.  This will be the first time a United States Marshal has spoken to the 200 Club audience.

The U.S. Marshals Service is the oldest Federal Law Enforcement Agency.  On September 24, 1789, President George Washington appointed the first 13 U.S. Marshals following the passage of the first Judiciary Act.  The act specifically determined that law enforcement was to be the U.S. Marshals’ primary function.

History and current operations can be explored on www.usmarshals.gov. 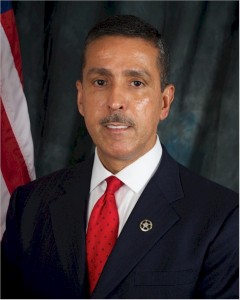 Juan Mattos, Jr. was appointed by President Barack Obama to become the United States Marshal for the District of New Jersey in July, 2011.  The United States Marshals Service for the District of New Jersey consists of a combination of 45 Deputy U.S. Marshals and 94 Court Security Officers whose primary mission is the protection of the Federal Judiciary and the apprehension of fugitives at the federal, state, and local levels.

Marshal Mattos is a career law enforcement officer with nearly 41 years of service to the citizens of New Jersey. He entered the New Jersey State Police Academy in 1974. After becoming a “Jersey Trooper”, he served in countless operational and administrative positions, ranging from assignments as a general road duty trooper, an undercover narcotics detective, and a recruiter. As he rose to the ranks of Captain and later Major, he served as the Equal Employment Opportunity/Affirmative Action Officer, Commandant of the New Jersey State Police Academy, and Commander of the Division Staff and Intelligence Services Sections.

In 2002, he was appointed to the position of Deputy Superintendent of Investigations, the second highest ranking position in the New Jersey State Police.  As the Lt. Colonel, he was responsible for the activities of over 700 investigative, scientific and administrative personnel. In 2004, Marshal Mattos was reassigned as the Deputy Superintendent of Operations, and was responsible for the activities of nearly 2,000 uniformed troopers and detectives, who provided general police services to over 70 rural and urban municipalities, and patrolling of all state highways throughout New Jersey. He also had oversight of over 300 security guards that provided protection to the State Capitol Building and other state owned properties.

In 2010, Marshal Mattos retired from the New Jersey State Police and was later hired by the Middlesex County Prosecutor’s Office, working in their Bias Crime Unit.

Marshal Mattos received a Bachelor of Science degree in Business Administration from New Jersey City University and a Master of Arts degree in Criminal Justice from Monmouth University.  He is a graduate of the 203rd session of the FBI National Academy and is a member of the Leadership New Jersey Fellowship Class of 2000.

Marshal Mattos was an Adjunct Professor at Monmouth University from 2004 to 2011, where he taught undergraduate courses in the Criminal Justice Department.

He resides in Middlesex County, New Jersey with his wife Evelyn.